The Company and its subsidiaries have always been mindful of its Corporate Responsibility (“CR”) towards the community, environment, its employees and its stakeholders and view CR as an extension of the Group’s efforts in fostering a strong corporate governance culture. Gadang Group also believes that CR is a good business proposition of which CR helps to enhance corporate image and increase the Group’s ability to attract and retain its quality human capital towards improving financial performance.

The Group plays its role as a socially responsible corporate citizen in the community through various activities held with the aim of caring for the wellbeing of society at large. As part of the Group’s social responsibilities, the Company has set up an Education Scholarship Fund known as “Gadang Scholarship” to award scholarships to deserving and financially challenged local undergraduates on a yearly basis. Up to year 2020, a total of RM1,050,432.00 was approved and allocated to 39 needy College / University students for their education. 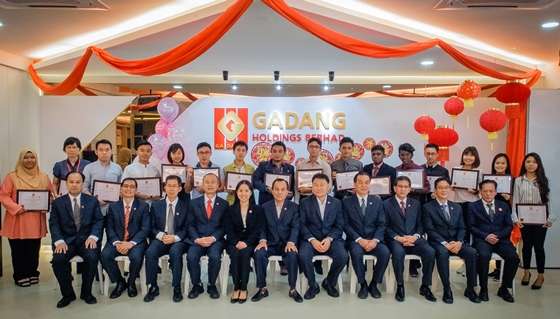 Over the years, the Group made various contributions to charitable organisations such as:-

Besides the above, the Group and the management staff also organized social visits and gave donations towards the children with special needs association.

On 6 October 2012, members of Gadang Sports Club paid a social visit to House of Joy, a social concern and non-profit organisation established to provide shelter, care and education for orphans as well as for underprivileged, delinquent and abandoned children and teens. In addition to its function as a children’s home, House of Joy also houses and cares for destitute or mentally ill senior citizens and young adults with learning difficulties. During the visit, the Group contributed cash and essential items totaling RM10,000 to the home. The children were also entertained with songs and a variety of games with prizes. At the end of the visit, the residents of the home were treated to a buffet lunch.

On 21 September 2013, in conjunction with the celebration of Mid-Autumn and while celebrating the Company’s 20th Anniversary, Gadang Sports Club hosted a special charity luncheon themed “Beam with Festivity and Joy” at HGH Convention Centre, Kuala Lumpur for some 700 old folks and orphans from 22 charitable organizations around Klang Valley.

On 14 December 2014, members of Gadang Sports Club paid a social visit to an orphanage home, Rumah Kasih Harmoni in Sungai Buloh, a non profit organisation established to provide shelter, care and education for disadvantaged children including orphans, those with poor single parents, homeless and hardcore poor.

During the visit, the Group contributed cash and essential items totaling RM7,000 to the home. In providing the children with better environment to live, the Company has also done some repair works to the surau room.

In the year of 2018, the Group has made many monetary contributions, to support people with mental health disorders in collaboration with Pertubuhan Kebajikan Mental Selangor and Pertubuhan Kebajikan Skizofrenia Malaysia, as well as donating laptops to underprivileged students. The Group has also sponsored associations and institutions such as the University Tunku Abdul Rahman (“UTAR”) Sungai Long Chinese Orchestra, Suara Inland Revenue Officers’ Union, and Yayasan Bursa Malaysia. GESB has made donations to associations for festive-season celebrations and contributed to foundations such as Malaysian Liver Foundation, Yayasan Sin Chew and Malaysia Blood Donors Society.

During the year of 2020, in response to a critical shortage of Personal Protective Equipment (“PPE”) as the medical frontliners were putting their lives at risk to combat the COVID-19 pandemic, the Group has sourced and contributed RM200,000 worth of PPE such as medical non-sterile protective gowns, shoe covers and medical goggles. The PPE was distributed among four hospitals to support frontliners in carrying out the life-saving missions. The Group truly appreciate the tireless efforts and selfless contribution of frontliners in combating the COVID-19 pandemic. Besides that, the Group has also made contributions in kind and in cash to old folks homes, National Autism Society of Malaysia, Da Ai Foundation, Yayasan Nanyang Press, Oriental Daily Sdn Bhd, Yayasan Sin Chew and Bursa Bull Charge Charity Run.

During Recovery MCO in September 2020, members of Gadang Sports Club paid a social visit to Pusat Jagaan Rumah Juara Petaling Jaya. The Group has donated cash, face masks, groceries and lunch packets for the children. Due to severe water disruption, the Group has also donated ten cartons of mineral water, paper plates, disposable forks and spoons to ease their daily living. A simple and short birthday celebration with the children born in September was held to bring joy to the children.

In November 2020, Persatuan Kebajikan Orang-orang Tua Bahagia Selangor (En Yuan Old Folks Home) which is occupied by approximately 30 old folks reported a need for bed sets. Therefore, our Project Director of TRX Package C3 liaised with the Person In Charge (“PIC”) for the home and arranged for five sets of used bed frames and mattresses to be donated to the home. The bed sets were disinfected before sending to the home. After handling over to the PIC, the members of TRX Package C3 disinfected the bed sets again to ensure they are safe for usage. The old folks were able to use the bed sets one week after the disinfection process. On top of that, the Group has also made contributions in kind and in cash to Pertubuhan Kebajikan Skizofrenia Malaysia, Rumah Sejahtera Rumah Orang Tua Bidor, Majlis Pusat Kebajikan Cawangan Kampar and amongst others. A total of RM471,183 was spent on Corporate Social Responsibility (“CSR”) activities.

When the flood disaster hit the nation in December 2021, several areas were badly hit and did not have access to basic necessities such as food and water due to the challenging logistic interruption. As part of Gadang’s corporate social responsibility, we collaborated with several agencies such as PDRM, BOMBA and JKM to reach out and help by using our site trucks to transport food to the interrupted places in Temerloh district, Pahang.

Not forgetting our staff whose houses were also badly hit by the flood in December 2021, Gadang gave out monetary aids to 15 employees to ease their burden during the difficult times. Our employees have also showed solidarity to help out staff that were affected by the flood. Project Banjir through Gadang Jaga Gadang was established to collect funds to help the victims to buy essential goods and for house repair works.

In FYE 2022, we have contributed a total of RM138,000 in our Corporate Social Responsibility (“CSR”) program to help the community. Our contribution in CSR have provided support to the following groups:-

The Group believes that human capital development is very important to ensure that the Group has the right and relevant skill and knowledge in ensuring business sustainability and growth. Continuous training and development programs are provided for staff internally and externally to equip them with both the skills and knowledge necessary to perform their current work, and the opportunities to demonstrate their ability to advance within the Group.

The Group also emphasized on the importance of the employees’ health and well being at the workplace. Besides providing health and hospitalization for the staff, health and safety talks are held on a regular basis to instill a health-conscious mind among the staff.

Efforts are continually made to create awareness on the collective responsibility among the employees for the prevention of injuries and occupational health hazards and the assurance of public safety when carrying out its business operations.

The Group seeks to recognize and honor the loyalty of employees who have helped to build the Group over a long period of time. Long Service Awards are presented to those employees serving more than 15 years of service. The awards were presented with the primary objectives of motivating staff to develop their career with the Group and rewarding them for their dedication and commitment towards the development and growth of the Group.